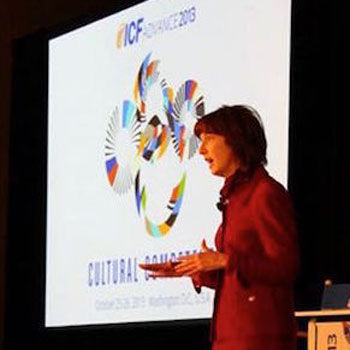 Hi Marilyn O’Hearne here with Carrie Abner, the recently appointed ICF Director of Accreditation and Coaching Credentialing. Carrie thanks so much for joining us. We have some questions for you today knowing that credentialed coaches are reporting higher fees and income with increased client satisfaction according to the 2017 Price Waterhouse Coopers Global Coaching Study. So we know coaching credentialing is important. 81 percent of consumers are rating the credential as important or very important. And I know as a mentor coach and as the moderator of the ICF Coaching Think Tank group on Facebook that people sometimes get confused about the difference between coaching credentialing and certification. So could you tell us a little bit about that please?

Carrie: Of course. Well first of all, thanks so much for having me. It’s really nice to be part of this conversation today. Happy to answer these questions, they are good ones. So your first your question is about what the differences between coaching credentialing and perhaps someone has completed a training and has received a certificate at the end of that training. There’s a pretty big difference and so it’s important to be aware of the difference.

Carrie: A certificate is usually provided to an individual who has completed a training program and they have completed a number of assignments. They’ve done studies as part of that training or educational program. Most oftentimes they will complete some sort of assessment at the end of that training. And at the completion of all of that the receive a certificate saying they have gone through this training or completed all the components of it. And now they are complete with this training, and that’s a really big achievement. It should be celebrated, and it is different from a professional credential.

Carrie:  Credentialing is usually run by some sort of independent organization, most often a non-governmental organization that represents a profession, a field, an industry. As part of its work it has undertaken research to identify the standards for that profession and has developed a credential that requires individuals with a credential to show a demonstration of achievement both educationally as well as professionally. So a credential may require someone to provide a certificate showing that they have completed training. That’s an important piece. But most often a credential will also require that individual to show professional achievement through work experience and the completion of an assessment that is not tied to a particular training program or educational program. So it represents a broader swath of a given profession or industry.

Carrie: In this case the ICF coaching credential represents coaches across the world who have gone through all different types of training and that training is important. Once an individual completes a training program, even if it’s an ICF accredited training program, it’s not quite the same as achieving an ICF credential. So we would encourage those coaches to take that next step and to apply for an ICF coaching credential as well.

Marilyn: OK, super, that is very clear. Thank you so much. We’re also wondering what might be some of the upcoming coaching credentialing changes.

Carrie: There’s always news and updates on this front. Many of your listeners and viewers probably are aware of the changes that went into effect in July. We had a number of policy changes that we announced last February that went into effect July 2018 impacting those interested in applying for a credential. Some of those are related to the requirements for mentor coaching particularly for ACC credentialed coaches, some of those with different impacts on credentialing across all three levels of our credentials: ACC, PCC and MCC. Those are all available on the ICF Web site. Again most of your viewers are probably well aware of those.

Carrie: We do have one additional change to our credentialing process that we have announced already but it doesn’t go into effect until February of 2019.  And that’s that in order to apply for an MCC must first earn a Professional Certified Coach credential or the PCC credential. And that is just in recognition that we’ve done a lot of research and our research shows that those who earn a PCC before applying for the MCC are much more likely to succeed. We just want all of our applicants to be well-prepared and to have a positive experience. And so this is one effort that we’re making to ensure that it’s a better experience for all of our applicants.

Marilyn: That makes sense. Thanks. And then you know that culture is dear to my heart. You know that I’ve written a book,  Breaking Free from Bias and also the cultural differences was something that I really advocated when I was on the ICF Global Board. And so we are curious about any updates on the impact of culture on the core coaching competencies. There was some talk at one point about integrating cultural and coaching competencies and just curious about how assessors are being trained around that and  how that impacts the assessment process of the performance assessments.

Carrie: Sure. Great question. For ICF as a global organization the topic of culture is really important to us as well. So it’s a great question, I appreciate that so much. I would say one of the big things that I’m pleased to report is within the ICF assessment training (all assessors who either assess for the ICF or we are also encouraging all assessors within ACTP programs to go through the ICF assessor training) which is called the PCC marker training. A big component of that training is all around bias.

Recognizing our biases because we all have them (Marilyn: Yes, we do!) and learn how to manage bias, and manage that particularly in the assessment process. It’s a big part of that training. It’s an important part of that training and it’s an exciting and rich conversation when we get to that unit section of the training. Another thing I would mention is, as you know, that both the ICF core competency model and the PCC Marker’s themselves were developed  by coaches across the globe. So the core competency model and the PCC markers really reflect the common behaviors and the common competencies regardless of culture.

So we all have different ways of delivering coaching and that’s going to be impacted by our training backgrounds, the type the style of coaching that we learned in our training but it’s also definitely impacted by our own cultural context and the culture of our clients. (Marilyn-Um hum) So we recognize that and that’s why for instance with the PCC markers they were developed after listening to hundreds and hundreds of hours of coaching conversations from all parts of the world and reflecting just a huge diverse array of cultures.

And those involved in that process really picked out the common baseline behaviors that were common in all of those recordings so it is reflective of a coaching behaviors across cultures. The core competency model again very much the same developed by coaches and validated by coaches across the world. Not only ICF coaches but non ICF affiliated coaches as well. And again that’s to get above the stylistic influences that may impact an individual’s coaching style as well as the cultural nuances that impact the coaching that we deliver. And we’re in the process of doing a job analysis where we’re revisiting the core competency model. And again we’ve sent out a survey to 47,000 coaches across the world to ask them about the key knowledge, skills, abilities and tasks associated with coaching. Again that crossed all cultures and stylistic influences so that to us is very exciting and that allows us to really identify the competencies that are common among all coaches around the world.

Marilyn: Thank you. And I think that you do probably try and match the assessor if possible to someone with the same language and the same culture because I know as a trainer and mentor, again, listening to a coach from Korea and how they start coaching conversations sounds much different than someone from a Western culture, for example.

Carrie: Yes that’s right. And even where we provide the performance evaluation where languages are spoken in a variety of countries around the world,  we try to also match from that cultural context. So if we had a candidate from French speaking Canada, we try to match the assessor from, for example, French speaking Canada as well so that there’s that cultural understanding in addition to just the basic language match.

Marilyn: Yes, that’s beautiful. Thank you so much. I think this has really helped clear up some things and I’ll be sharing it with other coaches. And thanks again for your time and all that you’re doing, Carrie.

PS Coaches are you ready to confidently advance your credential, your coaching, your business, with the cultural intelligence expected by our interconnected, diverse world and updated ICF competencies? Sign up for our next Culturally Confident Credentialing Mentor Coaching Program now-our cohorts have been selling out!

Click here: to Explore Cultural Intelligence and Discover How CQ You Are

Marilyn O’Hearne, with this week’s weekly wisdom, hoping to see you next week. Thanks!

To our potential, prosperity and peace-we are in this together!

PSS Do you want to be interviewed, or have someone you want me to interview? Let me know!

Marilyn O'Hearne MA MCC CQ Coaching: Unlocking Potential, Prosperity &Peace
When this happens, it's usually because the owner only shared it with a small group of people, changed who can see it or it's been deleted.
1    View on Facebook
Follow @@MarilynOHearne

Marilyn O'Hearne MA, CQ MCC ·
@MarilynOHearne
What's the most loving thing to do? What would our world look like if we paused & asked ourselves this before speaking in a meeting, with family, at a rally, or on transportation? I am needing to remind myself of this question frequently in our #conflict… https://t.co/mYaMBJ34P5
View on Twitter
0
1